President’s Suitmaker Files Chapter 11 and a Change at 21

Hello and Happy Weekend to all, we hope it is/has been enjoyable and rejuvenating.  Here at the Palace we are simply grateful to see a yellowish orb in the sky; we believe it to be the sun, making an appearance for a few hours.

Talk about signs that the apocalypse is upon us. Gahhhh. We offer only brief Prep headlines on several stories today, as the topics themselves are far too depressing to delve into at any length. We can only speculate that Great Aunt Molly is doing far more than the proverbial “rolling over in her…” if the following news has filtered up to her:

And then there is this…

…as reported in the Trib yesterday.  The Chapter 11 filing covers the Hart Schaffner Marx, Hickey Freeman, and Hickey lines.  And while we would quibble with the paper’s description of the company’s suits as “luxury” (especially when contrasting their prices with those of other upscale retailers, such as Brooks Brothers), the news is grim indeed.

(Remember this post when we discovered what the logo for the oh-so-hip Hickey line actually is??)

It was a navy Hart Schaffner Marx suit President Obama wore when accepting the Democratic nomination in Denver; he also wore their tuxedo Tuesday evening to the Inaugural balls.  Former Vice-president Cheney also favors the brand, purchasing five Hickey Freeman suits off the rack at the Tyson’s Nordstrom back in August, as detailed in this post.

Enough about this, we’ll move on to something cheerier, like a bit of pink… and green.  For those unconcerned about dates of issue, the Lilly Pulitzer Spot-On cuff bracelets are an outstanding buy, at 60% off their retail price. 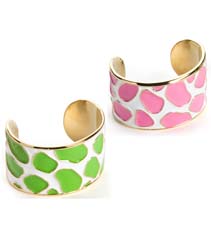 They are $38 at C. Orrico’s new online Sale Shack.  Another pink treasure, something we think the always fabulous Nautical by Nature could find appealing:

The Lilly Anchor Charm Bracelet at C. Orrico’s Sale Shack is selling for a mere $39, as opposed to its original $98. Who can resist?

The witty folks at Men’s Style are at it again with a wonderful slide show, “Change We Can (Sometimes) Believe In.” The piece is a “Then” and “Now” look at popular culture now and back in 2000, when we had our last change in Presidential personages.  Back then it was “conspicuous consumption” and now it is “conscientious consumption,” that sort of fun.

As we are total Mad Men fanatics here at the Prepatorium, we had to share their take on actor Jon Hamm, starting with this 2000 image of the star playing Burt Ridley(?) in NBC’s Providence:

And as they put it:

Ummmmm…. in the interest of journalistic integrity, TP feels compelled to add a much more recent image of Mr. Hamm from the cover of today’s USA Weekend newspaper insert: 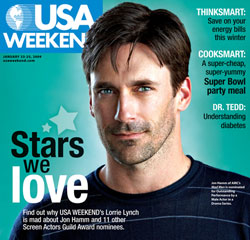 Until next time, stay warm!