Brooks Brothers With An Edge, the Azalea Maids Need our Help!

Good day from Snow Central in The Great Midwest!

Today we start with a few photos of what we call ‘edgy’ Brooks Brothers, the result of another collaboration with design genius Junya Watanabe.  First, a new twist on an old favorite, the madras blazer.

Along with a fresh take on the classic Brooks button-down. 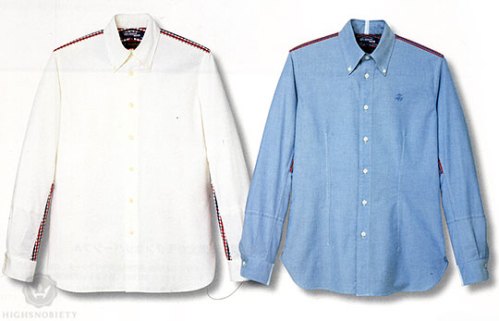 Not something we are likely to see the Consort turn in his existing shirts for, but fun to look at nonetheless! Our thanks to the folks at HighSnobiety!  And in more “Brooks Brothers News,” imagine our surprise when we saw this headline and story in Racked.com (another one of our daily reads):

A Racked tipster writes, “In a letter dated Jan 5th and sent to customers, Brooks Brothers indicated that they are relocating their staff and associates from the 5th Ave (and 53rd) store to their flagship location on Madison Avenue as of January 26th 2009.”

Apparently the departure is not related to the economy, at least not according to the Post’s story. And BTW, we continue to receive daily email from Brooks touting their Clearance Sale with ‘Up to 60% Off” original price points.

The last several daze days have been filled with little odds and ends of stories our cherished readers may find moderately interesting, so we’ll do another Preppy Digest this afternoon, starting with word from The Choosy Beggar in Friday’s post that Tretorn is having a great sale. 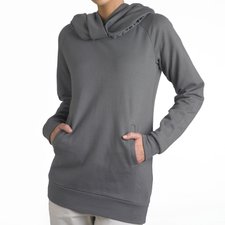 We liked the French Terry Hoodie because of its snuggle factor, clearly peaking in the red zone on the Snuggle-O-Meter. Also offering fiscally friendly prices, Kate Spade.  We are seriously considering the Holly Heights ornaments at only $38.

And did we mention the ongoing sale at Tory Burch? (Not to mention all of the Tory Burch on sale at Neiman’s, Saks, Nordstrom, etc.) The Lara Flat is reduced 33%, available in both navy and french yellow. 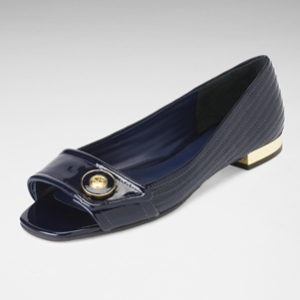 Fans of the oh-so-preppy-inspired Gossip Girl will be intrigued by the news that Chace Crawford‘s character (aka Nate Archibald) will be joined by a new character, a cousin.  And the new character’s name? Kip Vanderbilt.  Seriously. In other C2 news, the Leona Lewis music video Mr. Crawford is starring in debuts next week.

The Washington Post announced a winner in their “First Lady Formalwear Contest” in today’s paper. Readers were asked to submit their own designs for an Inaugural gown for Michelle Obama. WaPo fashion critic Robin Givhan selected the winning sketch from almost 200 designs submitted by the general public. 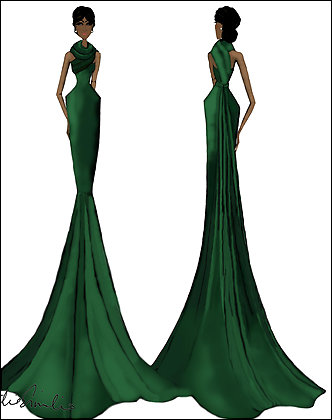 Katie Ermilio is the designer creating the sketch seen above; Ms. Givhan’s column detailing her reasoning for this choice is outstanding – a fabulous read.

For today’s Pretty in Pink we offer the utterly divine Pink Panther Collection by Thomas Pink.

The story idea and fabulous photos come via this story by the always-ahead-of-the-crowd folks at Selectism. Look for these treasures and a few more in February when the new Pink Panther movie is released.

And for our favorite photo of the day, we offer this stunning shot of the Azalea Trail Maids from Mobile, Alabama. 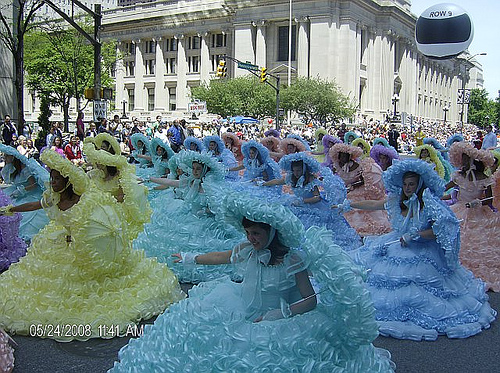 The Maids are beyond divine, but they need our help.  They are going to be in the Inaugural Parade in just over a week and are still raising $$$ to finance their trip to our Nation’s Capital.  A bit of background:

“The Azalea Trail Court, which is widely recognized as representing the finest in Southern charm and hospitality, has grown from a 10 member court who gathered for 3 days, to a 50 member court who represent Mobile year round at hundreds of civic events.” 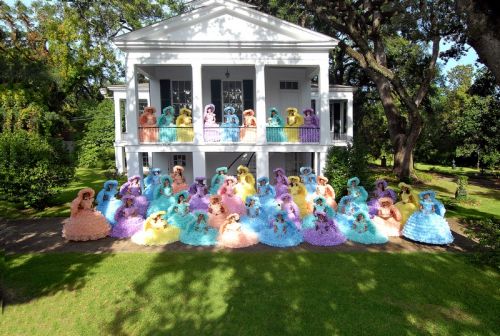 TP loves the Lawn Rangers, but let’s face it: the Azalea Maids are much prettier to look at, yes?

7 responses to “Brooks Brothers With An Edge, the Azalea Maids Need our Help!”