Well, hello again.  We spent a good part of the day away from Preppy Princess InterGalactic headquarters, picking up a houseguest and tooling about the area, come home and see this headline for Eric Wilson’s column in today’s Times:

As far as the story itself goes, the question is asked about the timing of opening the new J. Crew Women’s Collection. (That story follows this one.)

“Regardless of the market, J.Crew’s new designer collection — sold here and at jcrew.com — has raised eyebrows among analysts and competitors who wonder why on earth a company known for its preppy basics would put on such airs. Mr. Drexler said he believes in the product.”

“The first thing you see inside the store is a jacket covered in hand-painted French sequins to look like tortoiseshell, with a price of $3,000.”

“The clothes look more like those at Michael Kors, with featherweight cashmere scarves ($150), a gold beaded dress ($595) and a printed calf-hair jacket for $2,200; but mixed in were J. Crew staples like $85 matchstick cords.”

Mr. Wilson raises some valid points, although he points out:

“In the first three days, the store sold three of the $3,000 jackets and a surprising number of silk flower pins priced from $50 to $200, Ms. Lyons Mazeau said, looking at the numbers as a sort of validation. (Of 200 pins ordered for the store, only a dozen or so remained on Wednesday.)”

The next several months will bring rough sledding for almost every retailer; it will be interesting to see who does well in this environment. J. Crew’s first Men’s Collection store opened in Tribeca this August. (Here is one of our never-ending and somewhat tedious posts about it.)

With their second Men’s-only store slated to open next month in New Jersey (Garden State mall), Mr. Drexler has announced yet a third Men’s store.  This one will be in Soho, conveniently located next to their Madewell brand store on Broadway.  We thank the good folks over at Racked for the photo and their remarkable ability to stay ahead of all things J. Crew, among many other topics.

Regular blog readers know The Princess believes that what’s good for the goose is good for the gander. This is only one of many reasons she is pleased to share the news that the J. Crew Women’s Collection store has finally opened on the UES (Upper East Side) in New York.

The company is doing what we call a “soft-launch” if you will, no major promotion, the doors simply opened one day last week, and voila! There it was in all its perfection! The merchandise mix sounds fabulous in today’s WWD story:

“… the Collection store presents some higher-end products such as calfskin jackets, priced $2,200, or patent leather jackets lined in silk twill with a Ratti print, $1,800.” (Below.) 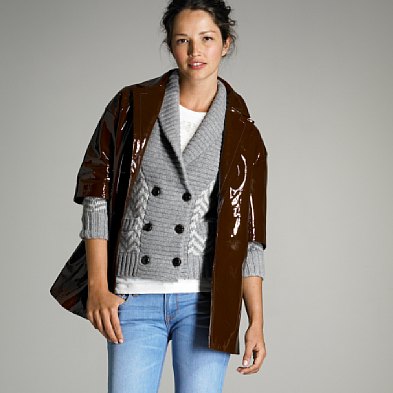 “There are also metallic jackets and shoes in the $300 range….”

Above, one of the Lugano pieces, also available online and through the catalog.

Below, one of the $3000 python Jamie handbags referenced in the article.

One of the many reasons we are so fond of Millard “Mickey” Drexler, J. Crew’s chairman and chief executive is evident in this statement:

“People tell me, ‘How about putting up a bigger sign,’ but we don’t want to intrude on anyone… In an Upper East Side building, I don’t think big signs are very elegant,” continued Drexler. “The last thing people want to see is their neighborhood become a strip center. It’s our way not to be out there, but to be there.” 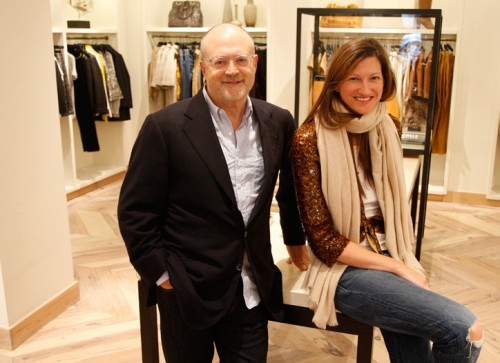 Above, Mr. Drexler and Jenna Lyons Mazeau, the company’s creative director, while touring the new store.  The store is on Madison Avenue, at 79th.

While you won’t find any of these goodies in the Collection, there is still a significant amount of merchandise still available at the J. Crew Clearance sale.  For an additional 20% savings on Clearance goods, use the coupon code EXTRA20.

We may not post every day this week as we are busy showing our houseguest around the area, so we apologize in advance for being a poor comment-leaver, we shall try and catch-up as soon as humanly possible.