Hello-hello and happy Thursday…The Princess is finding herself ever-so-glad it is the Thursday before a holiday weekend.

Let’s start with more news about politicians and their wardrobes, more specifically higher-end suits being chosen by those running for office, and those about to leave office. We have news just in to Intergalactic Headquarters of the Preppy Princess: we have learned that Vice-President Dick Cheney did some shopping at Nordstrom last Tuesday. For suits. He bought them off the rack and he bought American, thank you very much. Upscale, understated elegance by Hickey Freeman.

As it turns out, Mr. Cheney didn’t buy just one suit; he bought five of them, all five of them off the rack, and all by Hickey Freeman. The Vice-President selected the Madison model in gray, shown above; a two-button, single breasted suit in 100% Lora Piana Tasmanian wool, a fabric we are familiar with that is simply TDF. To. Die. For. What a marvelous choice by the Vice President.

Some of you may remember our story from last Saturday with the scoop that Senator Obama was being fitted for a navy Hart Schaffner Marx suit, and we wondered if it might be ‘The Suit’ he would wear for his acceptance speech at the Democratic Convention in Denver.

As it turns out, TP guessed correctly at precisely which model most resembled the suit likely to be picked by Senator Obama, as shown above; as his was bespoke, or custom made, the photo only serves as an approximation. And as we mentioned in Saturday’s post, the Senator was making a wise choice; Hart Schaffner Marx is not only an American company, it is a Chicago-based firm. Both the Senator and his wife Michelle are wearing apparel this week from Chicago-area companies. And as any politician knows, when running for office one does want to be attired in clothing that says “Made in the USA.” 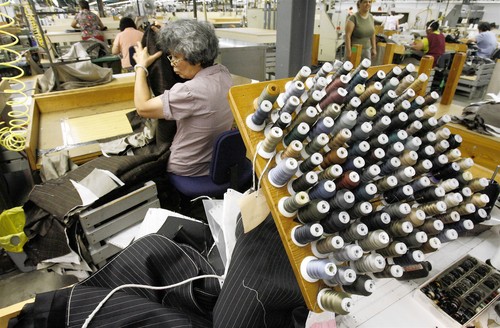 For those not familiar with the two companies, they are actually ‘siblings,’ both owned by ‘parent’ company Hartmarx. So in a sense, Vice President Cheney and Senator Obama have the same taste in business attire! Who’d a thunk?!

Not so fast little Miss Princess.

For openers, the Senator’s navy blue power suit is a much more contemporary look, essentially an Italian cut, hugging the silhouette more closely. Another distinction? Mr. Cheney’s suits are off the rack; Mr. Obama’s suit was custom tailored specifically for him. One similarity? When it comes to cost, they are both about the same price. The Senator’s suit would run approximately $1500 at a store like Nordstrom, according to HartMarx spokesperson Lisa Wells, and the online price we found for the Vice President’s selection is $1395, so they are within $100 of each other. 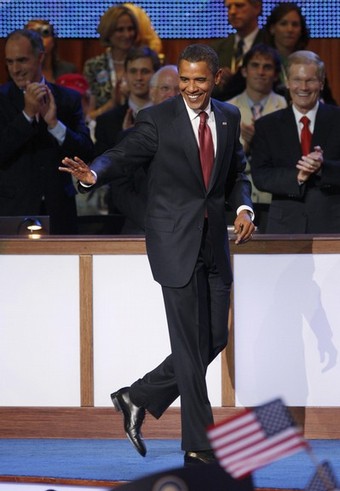 There is also some distinction is size. Senator Obama is a 40 Long with a Size 33 waist while Vice President Cheney is a 44 Regular. But here’s the big news: the tailor at the Nordstrom store at Tyson’s told our source that a year ago the Vice President was a Size 48! Evidently dropping from a 48 down to a 40 is roughly a 40 pound loss, so it would seem that someone has been doing *extremely* well on their diet! Perhaps that should have been our headline: Vice President Loses 40 Pounds!

We think not. But it is an excellent selection by both gentlemen. Many a prep has grown up in Hickey; it is the oldest tailored clothing company in the country.

Enough on that topic, don’t you think? (Until we feel the need to address it again, of course.)

Let us contemplate an always interesting topic: the US Open and tennis fashions. For starters we begin with something not designed by one of the big sporting goods companies. It’s actually the creation of what we believe many term a “supermodel,” Heidi Klum. The Heidi Klum US Open Tee Shirt is bright and vibrant, and better yet, it is made of 100% organic cotton and it’s for a good cause. Proceeds from sales of the tee go to the USTA’s (US Tennis Association) efforts to take care of the Billie Jean King National Tennis Center in Flushing Meadows, home to the Open.

Let’s talk about this latest Andy Roddick look from Lacoste. Historically whatever Mr. Roddick wears at the Open sells out within days, but TP wonders how popular a zip-front shirt will be to men.

However one likes it or doesn’t, Mr. Roddick has won his matches at the Open, including his first round match against of Fabrice Santoro of France as fiancee Brooklyn Decker watched.

Then we have Roger Federer’s look, truly an interesting style, or more accurately, color. 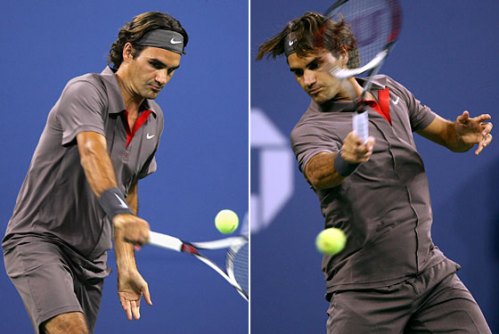 To the Princess, it looks like chocolate! But that is probably just wishful thinking. A rather muddy ensemble it seems… what do you think? Perhaps it will look better in the morning.