In a fabulous little post on their HiveDaily Blog, the good folks from StyleHive did a story on what they call the ‘Nouveau Prep look’ entitled This Summer, Preppy Meets Downtown.

The preppy, ‘I summer in Nantucket’ look reinvents itself every season, falling somewhere between Lilly Pulitzer and Ralph Lauren, but this season, it’s taken a new turn. As the perfectly put-together, overly polished look wanes in favor of a slightly (or more) rumpled one ever so popularized by the likes of Mary-Kate Olsen and Lou Doillon, stylishly in-the-know folk are taking the look downtown, knocking it around a bit, and then casually forgetting that last button when they clean it up. It’s a deconstructed polo, a slouchier take on the striped tee, a less conservatively cut sweater, a plaid skirt paired with beaten up old leather boots.. or in today speak, it’s Gossip Girl, plus practicality, minus the excessive layering. Scuff up those pristine Jack Purcells and take a look at my SLIDESHOW of five nouveau-prep styles.

Seen in that slide show is this ‘McQ By Alexander McQueen Blue Plaid Flannel Mini Skirt’ (below left) with its, ahhh…ummm…well…we’re just going to say it is a rather bohemian-appearing hem. Preppy? Methinks not. 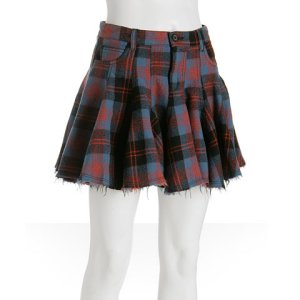 One of the other four pieces included in the slide show is the Project E Prj-Peace Polo at Lisa Kline, a fabulous online shop. What do you think about the mini-skirt? Now what do you think the odds are that TP is looking to add that little number to her walk-in?

Our next topic is the new look at Talbots, with an absolutely critical collection ready to launch for the retailer, due in stores next week. (The 10th of August to be precise.)

Reinvigorated. Redefined. Rethinking. Those are words being used to describe the Talbots 2008/2009 Fall and Holiday Collections. In reality what we’re talking about is no less than this, as reported in a story last week in WWD:

“This really is a relaunch of a venerable brand,” said Trudy F. Sullivan, Talbots chief executive officer and president, during an interview at the retailer’s New York creative studio on Tuesday. “Dowdy is done. It’s wiped out.”

You see more of the Fall line in the shot above; it also includes Michael Smaldone, the company’s Chief Creative Officer. Now you may be saying “This is all lovely TP, but what sort of changes might actually be noticeable to me as a shopper?” A few, including the following:

Below we show some of the Fall bracelets and scarves (left) and Trudy Sullivan, Talbots CEO, with more apparel (right). 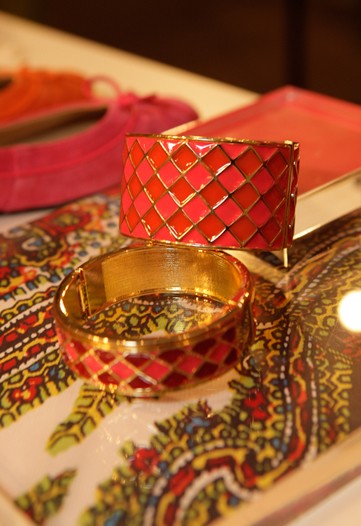 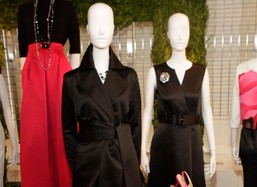 Here on the left is a tiny peek at the Holiday group, which looks intriguing, especially with the hot pink.

Overall (a *very* broad overall, see note below on color) things look a bit improved from our perspective, but we are more-than-eager to hear your reactions to the apparel shown and what little you could see of the accessories. Our immediate reaction was “Oh my goodness, it is very orange, isn’t it?” but then, most Fall collections at this level have that color in them… don’t they?

Regular readers may remember being subjected to ‘Mascara Wars – Round 3‘ with last week’s introduction of Lancôme’s Oscillation vibrating mascara. (TP has lowered herself to using a most vulgar term in describing the escalating wars: “Smackdown”. We recognize we may be evicted from the Country Club for stooping to such common street language.) 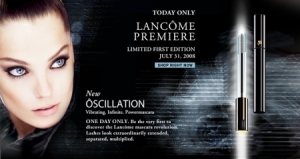 For those whose very life’s breath didn’t depend on every detail about this $34 mascara (available in one color only: black) , it was a one-day only pre-launch in advance of the mascara’s actual arrival in November when it will be readily available in the US. (Yawn TP, we are Y-A-W-N-ing over here…!) At any rate, WWD has a little update on this story (subscription req’d.), estimating that most of the select 17 retail outlets sold out of the mascara by lunchtime.

A figure of $200,000 in estimated total sales is used, and guess what else we learn in this article? “The brush, which is battery operated, provides 7,000 micro-oscillations per minute,” according to Jean-Louis Guéret, creator of the mascara. See ladies, TP recognizes you will sleep better tonight having that information. (Heh-heh.) Now if you want to sign up to be notified when the mascara is available for purchase in November, the Oscillation page is still active for that function. And isn’t that a relief?

Now friends, TP must scoot. We’re lunching at Neiman’s just to have those divine popovers with the raspberry butter (or is it honey butter?) and then off to the trunk show and private fittings.