Those old enough to remember the 1970 film Love Story will surely remember that classic line; those not familiar with the movie must take our word that this is actually one of the ultimate ‘preppy films,’ with a plot revolving around a Radcliffe music student (Ali MacGraw) and a Harvard Law student (Ryan O’Neal) named Oliver Barrett IV. How’s that for a character’s pedigree, at least in a movie?

At any rate, The Princess begs to differ with this insipid statement, for the time has come that she must stand up tall, reach up to re-adjust the tiara, and say loudly and clearly for all to hear: “I am sorry. I was wrong” to designer Thom Browne and retailer Brooks Brothers. There you have it. ‘My bad’ as is said these days, I believe…?

For those not familiar with the saga, Thom Browne is a gifted fashion designer, a professional with many years in the industry and far too many honors and awards to mention. Mr. Browne is also the first individual retained by Brooks Brothers to be a ‘Guest Designer,’ asked to create a Collection for the company’s upscale Black Fleece line. As Brooks’ agreement with Mr. Browne was nearing its end, we did a little speculating in a post back on June 5th that the arrangement would not be renewed and the two entities would part company. This is where we were quite mistaken, with word today that Brooks and Mr. Browne have not only renewed their agreement, Mr. Browne will be with the firm through the Spring 2011 season. Mea culpa, mea culpa, mea maxima culpa and congratulations to both parties!

In fact the company is so pleased with the micro-brand’s performance they are moving ahead with plans to open a freestanding Black Fleece store! Woo-hoo! (Calm yourself Princess.) As seen in the artist’s renderings below, this will be a new stand-alone Black Fleece shop in Greenwich Village!

Now just to be clear, we do stand by our comments regarding Mr. Browne’s design taste and talents as detailed in our May 29th post entitled “When Preppy Goes Wrong (How Thom Browne Helps Brooks Brothers Make the Cut)”. If you missed that particular day’s mindless meanderings thoughts on the topic, we were far kinder in our comments about the Women’s Collection than we were when discussing Mr. Browne’s designs for the Men’s line. Oddly (or not, knowing TP), this is completely out of step with actual sales numbers, which were lower than projected in Women’s, and higher in Men’s. Below, a few reasons why we find positive signs on the Ladies’ side of the store:

On the left we show a Black Fleece Women’s Button Back skirt and on the right the women’s Cricket Sweater, both of which we find to be quite fetching, although we would throw up a question here: how does the Black Fleece ‘Cricket Sweater’ differ from the Polo Ralph Lauren Wimbledon Collection Cricket sweaters? (We show those below.) 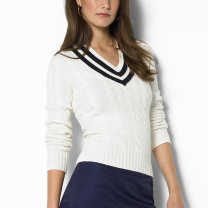 We raise the issue acknowledging that when approaching this from a classic design perspective, there is little room for substantive alteration to the original. It just struck us as odd here at the Prepatorium; perhaps a simple case of too many tennis/cricket sweaters!

Also seen in this post, way, way, way up top we show a few Black Fleece women’s accessories: a pair of Knee-High Embroidered socks, a Navy Leather Belt, and a pair of Women’s Wingtip Spectators, all of which happen to be on SALE!

Since we have dragged Ralph Lauren into the conversation we’ll just move ahead with some early photos of the US Open Collection, available sometime in July, possibly as soon as tomorrow. All of the pieces are Limited Edition (ahem) items; most are constructed of very high-tech fabric that is just fabulous. Our ‘ahem’ is aimed at the ‘Limited Edition’ notion. I mean really…hhmm. We’ll do everyone a favor and slug back a Prozac Latte and save this topic for another day, but honestly… (Imagine the alltime big-big-biggety-biggest sigh ever heard being sighed here at the office. The weight of the world is on the shoulders of one small, old, Logophobic, cranky Princess. Imagine that sigh being sighed again. Sigh.) 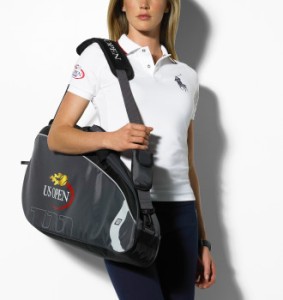 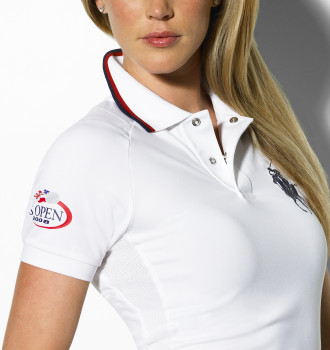 Above we show the US Open Lineswoman Polo in stretch microfiber. 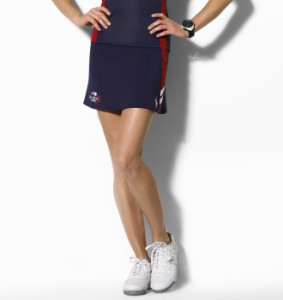 Next is the Official limited-edition US Open sleeveless Ball Girl polo.

And finally we show the Official Limited Edition US Open Avondale Track Jacket, described as being made of “soft cotton jersey, knit with a hint of stretch for ease of movement on the court.”

And for trivia fans wondering about that insipid line in Love Story, it was actually spoken twice;

once by Jennifer when Oliver is about to apologise to her for his anger. It is also spoken by Oliver to his father when his father says “I’m sorry” after hearing of Jennifer’s death