When Madras is OK…and When It’s Not

It appears the Los Angeles Times has discovered madras. At the very least they have determined “Classic Madras Plaid Returns,” according to an interesting story in Sunday’s (May 4th) paper from Staff Writer Melissa Magsaysa.

MADRAS PLAID, the preppy staple, will always conjure images of clambakes on the Cape and touch football on Martha’s Vineyard. But this spring, the breezy fabric is having a fashion moment, turning up on everything from retro nerd, short sleeve men’s shirts to string bikinis.

Aside from referring to the fabric as a ‘staple’ (conjuring up all manner of dreadful images), the story does point out the number of “hip designers” using madras this spring, including Vivienne Westwood, and uber-chic French atelier APC, with founder Jean Touitou joined by designer Jessica Ogden for the Madras line.

However, as any to-the-manor-born Prep is aware, all madras is not created equal. Translated: just because it’s madras doesn’t mean it’s invited to the party. Take for example both the Kohl’s Periscope pastel madras shorts on the left and the Victoria’s Secret pair on the right. Both are wonderful for an infinite number of things, but neither are acceptable for Wednesday’s golf game at the Club. Not even close to scraping by for drinks at the 19th Hole in the Clubhouse afterwards. 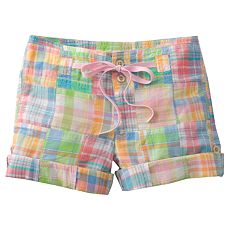 It has nothing to do with the store of origin; these darling flip-flops, also from that wicked Victoria’s Secret, are absolutely ideal for making your way between the Ladies’ Locker Room and the pool at that same Country Club. And the bikini from French firm A.P.C., will look outstanding soaking up the sun at the pool at that same Club.

But then again, the Cape Madras Mini-Mini Skirt at 12″ in length, won’t work for some of your more ‘serious’ social occasions. (Don’t even think about it for a League meeting.) In fact, it does remind The Princess of those long-ago mini-skirt debates. You know, the “No daughter of mine is leaving this house in a skirt that length!” conversations. The more conservative Chadwick’s Skirt will pass muster at most establishments, raising nary the disapproving eyebrow.